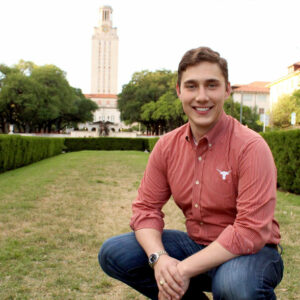 University of Texas at Austin, 2017

B.A. in Economics, Minors in Mathematics and Business Administration

University of Texas at Austin, 2018

John graduated from The University of Texas with both a B.A. and M.A in just four years! He completed his B.A. in Economics with High Honors and Special Honors in Economics (for his thesis research titled “Evaluating the Effects of Greek Life Policy on Student Grades”).

After college, John was accepted to Vanderbilt University Law School’s joint doctoral program to pursue both is Ph.D. in Law & Economics and his J.D. He was awarded a full tuition scholarship for both degrees, a stipend for living expenses, and funding for his own research. Feeling at home in the classroom and at the courthouse, John hopes to wear hats as both an attorney and economist in his career, with plans to specialize in civil litigation and government policy analysis. Professionally, John served as an Adjunct Assistant Professor of Economics in the Austin Community College District before moving to Nashville to attend Vanderbilt. While in law school, John has served as a summer law clerk to the Honorable Jeffery S. Frensley, Magistrate Judge for the United States District Court for the Middle District of Tennessee, and to the Honorable Sheila D. J. Calloway, Chief Judge for the Juvenile Court of Metropolitan Nashville and Davidson County, Tennessee.

“Growing and maturing in a community that fosters wisdom, courage, and faith set the course for who I am today and who I will be tomorrow. Above all, it is the compassion, forgiveness, and safe atmosphere that I will never forget about St. George or the people who mentored me there.”